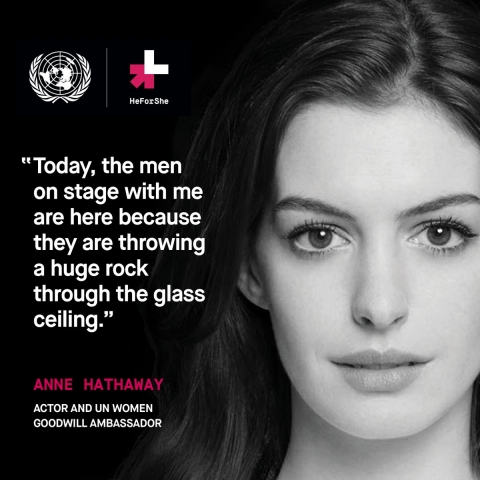 HeForShe is a social movement campaign providing a systematic approach and targeted platform through which men and boys become agents of change for the achievement of gender equality.

According to UN Women, achieving gender equality requires an inclusive approach that both recognizes men and boys as partners for women’s rights, and acknowledges how they stand to benefit from greater equality. UN Secretary-General Ban Ki-moon and UN Women Global Goodwill Ambassador Emma Watson introduced the campaign to the world in 2014, leading hundreds of thousands from around the world, including Matt Damon and former President Barack Obama, to endorse the campaign.

At its launch, UN Women made a call to mobilize the first 100,000 men in the campaign; a goal successfully reached in only three days! Now four years old, HeForShe has garnered approximately 1.3 billion commitments, a number continuing to grow. From the United States alone 141,000+ commitments have been made, most of which have come from men.

The movement has four broad-based goals and through its advocacy efforts seeks to: 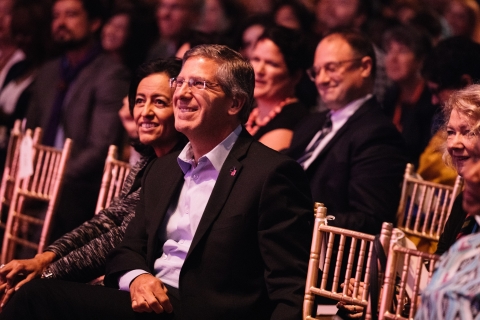 After its first year of successes, HeForShe launched IMPACT 10X10X10 in the Fall of 2015. The HeForShe IMPACT 10x10x10 program engages key decision makers in government, corporations, and universities around the world to drive change from the top. IMPACT Champions selected make gender equality an institutional priority by implementing the HeForShe framework and developing three bold, game-changing commitments to advance and achieve gender equality for all.

HeForShe celebrates its IMPACT Champion achievements each year in New York City during the convening of the UN General Assembly. World leaders, global CEOs, university presidents, and public-sector leaders shareground-breaking solutions towards the achievement of gender equality and how we are #morepowerfultogether.

Enjoy the 2018 HeForShe IMPACT Summit in the below video: 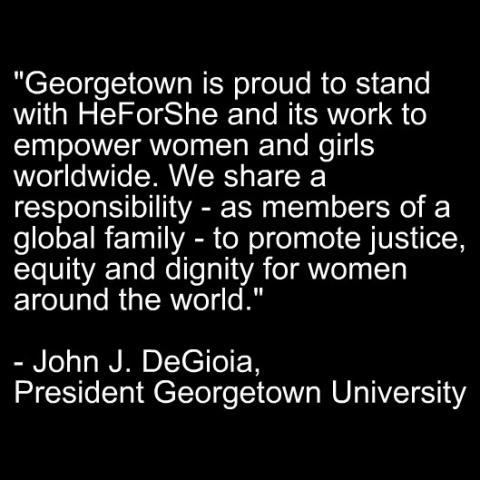 IMPACT 10x10x10 Champions based in the United States include Tupperware, PricewaterhouseCoopers, and two institutions of higher learning – Georgetown University and Stony Brook University.

Committing as a HeForShe Champion challenges these partners to engage with a specifically designed framework for their sector. Heads of State personally champion gender equality, companies sign and institute the Women's Empowerment Principles, and universities institute mandatory gender sensitization on campus and work with other universities to address gender-based violence.

For PwC, Tupperware, and other corporate IMPACT Champions, research shows that gender has a positive impact on companies' bottom line and improves decision making. Yet 95% of Fortune 500 CEOs are men and there remains a pay gap in every country around the world. CEOs have an opportunity to lead by example through actions that demonstrably advance and empower women in the workplace.

For the Georgetown University and Stony Brook University presidents, the urgency to reach young people while they are still shaping their perspectives on gender, will impact a whole generation. Universities are uniquely positioned to influence and galvanize this group by addressing campus violence and changing mindsets around gender. And with half of the world's population under the age of 30, a figure expected to rise to 75% by 2025, the time to shift gender perspecitves has never been more IMPACTful.

UN Women USA has supported the HeForShe social movement campaign since its launch in 2014. While the majority of our organization's efforts support UN Women's core fund, our chapters in Greater Los Angeles, San Francisco, Metro New York City, and Miami, have successfully advocated for gender equality by organizing special In Support of HeForShe events.

As our most recent example, the Gulf Coast Chapter dedicated its 2017 Annual Fall Breakfast In Support of HeForShe. Its leadership team did so by bringing in an academic researcher and acting troupe, both centering their presentations before event attendees around revamping outdated gender norms. 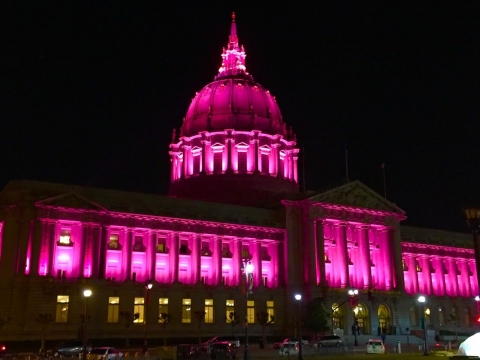 In 2016, our San Francisco Chapter conducted two events within a month In Support of HeForShe. The Chapter's In Support of HeForShe Champions for Change Celebration honored five Bay Area men shattering gender barriers for the empowerment of women and girls in their community and beyond. As part of the Celebration, San Francisco's City Hall was illuminated for the occasion.

The SF Chapter additionally launched its now-annual Global Voices Film Festival, highlighting work from female filmmakers and the imperative need to support women in the film industry as a means for improving gender representation in film.

Also in 2016, our Greater Los Angeles Chapter hosted its first L.A Media Summit In Support of HeForShe. The event was held at the #YouTubeSpaceLA and was attended by filmmakers and advocates such as Academy Award-winning actor and UN Women #EqualPay advocate Patricia Arquette, writer/director Joss Whedon, Executive Director of the ACLU for Southern California Hector Villagra, and CNN reporter Carol Costello. These panelists took time to imagine the benefits of achieving gender parity in the entertainment industry for all gathered. 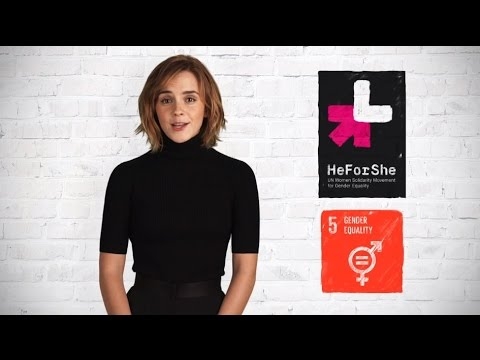 Instituted throughout the UN system in 2015, the SDGs grew out of the Millenium Development Goals -- eight international development goals in effect between 2000-2015, emphasizing three areas: human capital, infrastructure, and human rights. In contrast, the 17 SDGs are broad and interdependent, each maintaining its own list of targets--169 all together. These goals encompass both social and economic development issues.

UN Women is very pleased with Goal 5, which deals with key barriers to gender equality and women's empowerment. Business as usual and incremental improvements will not deliver the future women and girls need. Only far reaching and bold changes will do.