In the words of Aissa Doumara Ngatansou: “My own experience of discrimination inspired me to become the activist that I am today” 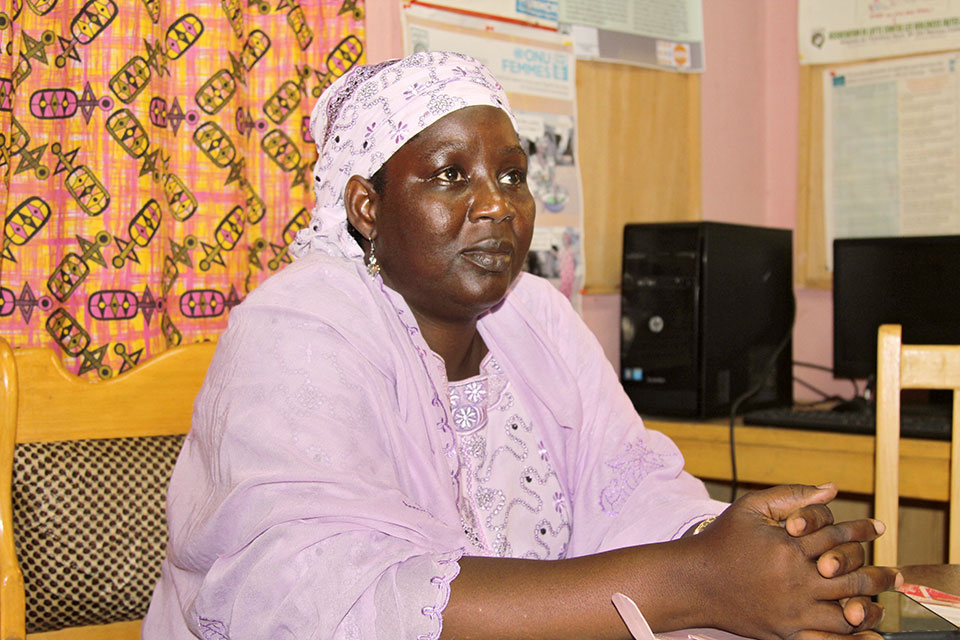 Photo: UN Women/Teclaire Same
Aissa Doumara Ngatansou is a 46-year-old mother of three children from the Far North Region of Cameroon. She co-founded a branch of the Association for the Elimination of Violence Against Women (ALVF) in the city of Maroua in 1996. ALVF works with survivors, and advocates with decision-makers to end early and forced marriages, and other forms of gender-based violence.

With the support of UN Women, as part of the humanitarian program funded through United Nations Central Emergency Response Fund (CERF) and the Government of Japan, ALVF has been providing relief, livelihood, and psychosocial support to women and girls affected by the Boko Haram insurgency in the region.

"I lost my mother when I was 11 years old, and by the time I turned 15, my father and his family decided to marry me off to a man of their choice without my consent. That was when I realized that I had to do something for myself. My own experience of discrimination inspired me to become the activist that I am today.

After I got married, I decided to continue my studies. My husband’s family opposed my decision, but I stood my ground. Eventually, my husband became more supportive. After completing high school, I worked with other women to start our association in Maroua to support women and girls experiencing violence.

Through my own struggles I realized the main challenge is the patriarchal nature of our society. Gender discrimination and violence against women is rooted in our culture and religion. In our area, religion and culture are intertwined and men use religion for personal interest and to keep women marginalized. Women are simply not given equal importance and treatment as men. Men think that violence is normal, and women need to accept the abuse.

At the Association, I receive cases of gender-based violence daily. Sometimes, I get calls or visits at home from educated women [who hold] important positions in the society, and are too ashamed to seek help openly. After counseling them, I refer them to the social worker or the gender desk for more services.

This is not an easy work; we have faced many attacks from the families of the girls whom we were protecting. Some families even filed court cases against us for sensitizing their daughters against early marriage. Religious leaders were also opposed to the work we were doing. The determination and solidarity among the founders and our members keep us going.

We have made considerable progress in sensitizing women, traditional and religious leaders and families… but it’s still not enough. Child marriage and rape of young girls is still rampant in our society, and the Boko Haram insurgency has made it worse. It has caused massive population displacements in the region and increased poverty and school dropout rates of young girls. There is also a rise in rape and kidnaping of young girls by the terrorist group. This has made many parents marry off their girls early.

The government needs to put in place measures to implement the existing laws that punishes perpetrators of gender-based violence.”