From where I stand: “I have my dignity back and I am proud of my little business” 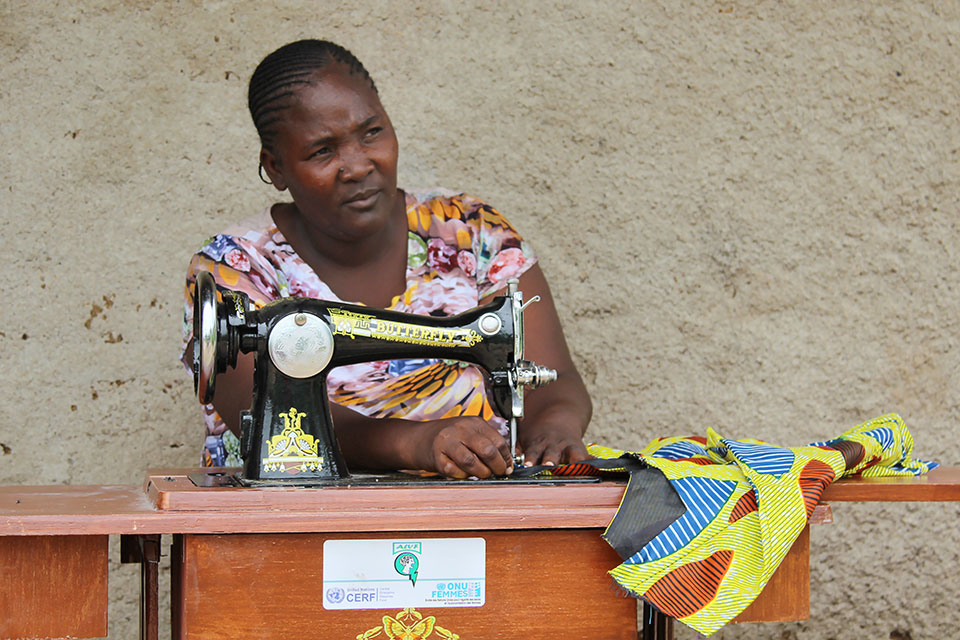 Photo: UN Women/Teclaire Same
For over a decade, Boko Haram insurgency has displaced over 200,000 people within the borders of Cameroon. After being on the run for years, Rachel Medivede and her family settled in the northern town of Mora, where she received counselling and livelihood support from a UN Women-supported program. Medivede now works as a dressmaker and has also started her own business of selling beignets.

"I was six months pregnant when Boko Haram attacked our village, Banki-Amchide in 2014. They had been abducting young girls in our village and tried to kidnap my daughter, but I shouted for help, and they fled.

In the counter-attack against Boko Haram, the military sprayed a poisonous gas that affected my baby; he was born with health issues and died within four days.

My family and I fled Banki-Amchide without any of our belongings. We left behind herds of cattle, bags of beans, a motor bike, money that we had buried in a safe box and even our clothes. We walked for over 20 hours, about 25 kilometers, to reach Taeyer. Barely three months later, Boko Haram attacked that community too. We took off again, fleeing to the town of Tokombere first, then to Mougoula, and finally to Mora in 2017.

When we arrived in Mora, we didn’t have any money and my husband beat me often and left us for weeks to look for jobs in distant towns. Moving from one town to another because of the attacks disrupted my children’s education. My eldest daughter dropped out of secondary school and I married her off, along with her sister, because I feared for their safety.

Things started improving once I met a community worker who told me about UN Women’s project that supports women who have been displaced by Boko Haram insurgency. I received counselling services at the Women’s Empowerment Center, and the counselor came to my house to speak with me and my husband. I also got training to start a business—I learned the process of developing a product, how to market it and how to calculate the proceeds.

Today I have my own business making and selling beignets for a school in Mora and for people in the neighbouring villages. Through this business, I am able to save 5,000 CFA (9 USD) every day and I can send my children to school again.

Harmony has returned to our home, I have my dignity back and I am proud of my little business.”

Rachel Medivede has had a harrowing ordeal, fleeing multiple Boko Haram attacks in Cameroon. She received counselling and livelihood support from a UN Women supported project, implemented by Association de Lutte Contre la Violence Faites aux Femmes social workers in Mora, a town in the Far North region in Cameroon. The project is funded by the Government of Japan. Now Medivede helps other women in her community in identifying early signs of violence in their families and to access services. Her story demonstrates the urgent need and value of economic recovery and adequate services for women fleeing Boko Haram violence and instability, and links to Sustainable Development Goal 16, on promoting peace.