Thank You for a Successful Season

We'd like to thank all our members, supporters, and friends for helping to make our 2020-2021 season of events truly successful. We pivoted to virtual options for our annual walk, lunch, and film festival, and while we missed gathering in person, we're thrilled with how these events went.

Stay tuned for updates on the exciting events we're planning for the 2021-2022 season. And again, thank you for your support.

The Gulf Coast Chapter of UN Women USA is committed to encouraging membership and leadership that is diverse and inclusive.

UN Women believes that women are the product of their lived experiences. These experiences reflect a diverse array of religions, races, cultures, and sexual orientations. They shape who women become as individuals and as family and community members.

It is our fundamental belief that when a range of diverse voices is heard, our Chapter is more productive, purposeful, and joyful. Through the efforts of women and men who reflect our entire community, we are better able to achieve our goals and provide our members with enriching, fulfilling life experiences.

From virtual community conversations with award-winning filmmakers to our annual walks, luncheons, and the Through Women's Eyes International Film Festival, the Gulf Coast Chapter hosts a variety of engaging events throughout the year. Stay up to date with what's next here.

The Impact of COVID-19 on Women & Girls

• Women are 70% of health and social workers globally.
• Women are more likely to lose an income.
• Women who are displaced, refugees or migrant workers are particularly vulnerable in a pandemic.
• In quarantine, domestic violence and sexual exploitation have risen. Access to justice is disrupted.
• Women do 3x the unpaid care work compared to men.

UN Women is there for women during COVID-19 and always.

Take action for good. Any amount will help women around the globe.

UN WOMEN: NOW MORE THAN EVER.

GCC is a group of committed women and men who work to:

As a local Gulf Coast Chapter Member, you help actuate change at the global level. The work is real and effective. Please support your chapter events and change the lives of women everywhere.

Saturday, December 5, 2020
Walk With Us - Beginning with an online fundraising campaign, this community walk in Sarasota helps raise awareness about violence against women.


Saturday, February 13, 2021
Women and the Environment - Join us for an issue-oriented lunch at the Sarasota Yacht Club. Tickets.

March 5-7, 2021
Through Women's Eyes International Film Festival - In its 22nd year, this high-profile festival presents the very best in new, groundbreaking films by established and emerging filmmakers from around the world.

Beginning with an online fundraising campaign, this community walk in Sarasota helps raise awareness about violence against women.
More Information

Our largest event, this high-profile festival presents the very best in new, groundbreaking films by established and emerging filmmakers from around the world.
More Information

A Community Conversation about Gender Equality and the Environment
A panel discussion with Christine Johnson, President of the Conservation Foundation of the Gulf Coast, and Dr. Heather O'Leary, Assistant Professor ISS-Anthropology, University of South Florida. Moderated by E. Scott Osborne and Chris Serio Martin.

February 1, Saturday:
Walk With Us
Community walk to raise awareness about violence against women and girls
9 a.m. at Payne Park, Sarasota

Through your support, our programs raised more than $50,000!

January: "The Power of Speaking Up: Sparking Conversations and #MeToo 2019 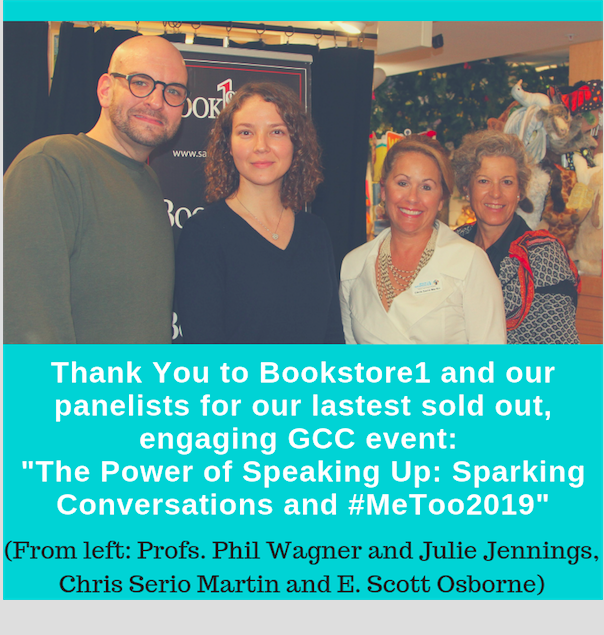 Men and women gathered at a sold out event at Bookstore One in downtown Sarasota to learn about issues surrounding #MeToo.


February: "Walk With Us. The Power of Community."

On this beautiful day, many community groups joined us to raise awareness and share stories of their efforts fighting violence against women and pushing for gender equality. The GCC online fundraising program was a great success! 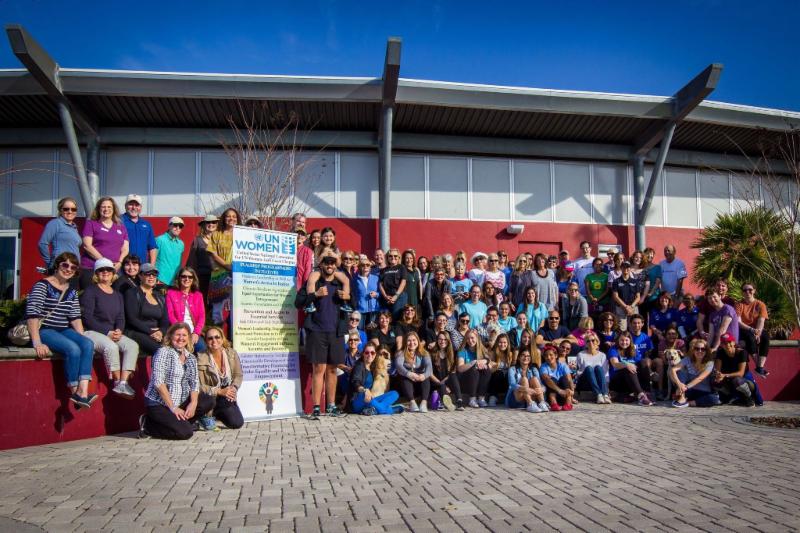 
March: International Women's Day - The Power of Voice Through Books
On Friday, March 8, at the Art Center, Sarasota, we enjoyed celebrating women around the globe and the words of our speaker, Dr. Deborah G. Plant, an African American literature and Africana Studies scholar.

Through Women's Eyes International Film Festival Was a Great Success!
We enjoyed a wonderful and inspiring collection of outstanding films, sold out our TWE ticket packages, and raised a record amount for UN Women programs. Attendees saw a broad range of films that showcased brave and inspiring women. For more descriptions of TWE films see throughwomenseyes.com.

Thank you to all who attended and supported TWE!

Also, thank you to Manatee Educational Television for terrific coverage of our Fabulous Filmmakers Reception. Enjoy the video interviews of our filmmakers below.

Walk With Us, a Walk Against Violence in March was a great success. We partnered with Café in the Park in downtown Sarasota and benefited from the support of the Pine View Peace Jam club. Thanks again to Coastal Eye Clinic for their generous sponsorship.

Through Women's Eyes, our signature international film festival had another banner weekend this past April, with sold out theaters for many of our fabulous films.

These collaborative Chapter efforts raised more than $40,000, all of which goes to support UN Women programs.

HeForShe is a UN Women solidarity movement for Gender Equality.

Why become a member of USNC-UN Women?

Around the world, governments, corporations, families, and individuals are realizing the universal benefits of gender equity, and UN Women is the neutral, global voice for Gender Equity.

The need for UN Women programs has never been more in demand and the Gulf Coast Chapter of the U.S. National Committee for UN Women is stepping up to meet the challenge! All proceeds from GCC activities go to support UN Women.

If you are interested in participating in the work of the GCC chapter, please email gulfcoast@unwomen-usnc.org.

The UN Women-USA GCC Book Club will meet via Zoom in Monday, August 10, to discuss "Cantoras" by Carolina DeRobertis, a Uruguayan-American author.  This is the story of five lesbian women in 1977 Uruguay, under a military government that crushed political dissent with ruthless force, and where homosexuality was a crime.

July Book Club: The Origin of Others by Toni Morrison

Join tus for a timely and eye opening discussion of Toni Morrison's The Origin of Others on Monday, July 13. The meeting will take place on Zoom OR at the Betty J. Johnson Library in Sarasota. Contact Leita Kaldi Davis (lkaldi@hotmail.com) to be notified of the location and receive log in information, if needed.

This title was selected in view of the intense global uprising in the wake of George Floyd's murder by police, prompting us to delay our regular book schedule for a month in order to focus on a noteworthy book on racism in July. Choosing one book is a heavy task, made even more challenging by the fact that many books by acclaimed authors like Ta Nehisi-Coates, Dr. Robin DiAngelo, Ibram X. Kendi, Ijeoma Olu, and Trevor Noah are out of stock at major booksellers and checked out or on hold at the Sarasota libraries. (That's rather telling, is it not?)

In the end, we chose a book that is both available and appealing to our readers: The Origin of Others by Toni Morrison, We invite any and all interested parties (membership in UN Women GCC is not required) to read this and join us for our discussion on July 13.

Join us on Zoom on Wednesday, July 15 at 2:00, to hear Jessica Hayes, CEO of SPARCC, and GCC representatives for a conversation about intimate partner (domestic) violence. Time for questions and discussion following the presentation.

Click the link below on July 15 at 2:00 (or just a few minutes beforehand) to join this community conversation: