November 25th is a Special Day

The following is a guest editorial for the Sarasota Herald Tribune by GCC president E. Scott Osborne.

Now count off by threes.

Chances are, those one-in-three women – those women you know - have experienced gender-based violence. In fact, fully 35% of women experience it at some point in life. Gender-based violence does not discriminate by race, ethnicity, marital status, religion, or socio-economic position. It does not just target women who are poor, vulnerable to trafficking, or in far-off countries.

Physical violence is common, encompassing everything from hairpulling to that extra tight restraining grip on the arm to beatings and rape. Emotional violence takes the form of control and abuse: verbal hostility, control over a woman’s behavior or speech or dress, or control over finances.

But the problem remains hidden. Women are socialized to feel responsible, to feel ashamed, to feel they need to “protect” violent men, not report the incident or press charges. The cost to individual women is devastating, but society as a whole pays, too. Medical and mental health care, lost wages, and criminal justice expenses all add up.

In the US alone, annual costs of intimate partner violence were estimated at $5.8 billion in 2003. That’s billion, with a B. In India, women lose up to five days of paid work for every violent incident; in Uganda, women lose approximately 11 wage days per year, affecting their children, households, and the local economies.

Clearly, change is in order. But to change we need to understand the real causes of this violence.

The real root causes of violence against women are three-fold.

First, a widespread belief in the superiority of men. This includes social conditioning that masculine authority is natural; almost everywhere, men are trained to dominate — and women are trained to accept this domination.

Second, the lack of consequences of using violence. If society sees men’s physical strength as an acceptable way to express needs and exert control, negative consequences do not follow.

Third, acceptance of economic and legal inequality for women. When women are paid less for work of equal value, or are treated differently under the law, it sends a message that they are inferior and subordinate.

For the past ten years, the Gulf Coast Chapter of UN Women USA has held a Walk to End Violence to raise awareness about the problem and funds to combat it. We’ve walked on Siesta Beach, in Payne Park, and in our neighborhoods. We have invited community groups such as SPARCC, the Police Department, and local high school clubs to shed more light on the issue.

This year our walk continues, virtually. We kick off our campaign on November 25, the International Day for the Elimination of Violence Against Women, and end on December 5, with activities every day. We invite you to join by registering for this year's walk. But even if you can’t join us, here’s what you can do.

Engage men. Women are overwhelmingly the victims, not the perpetrators. Stop viewing this as a women’s issue to solve. Men need to change and grow to understand that healthy masculinity does not require control, violence, and the denigration of women. (There are certainly cases of men and trans people who are targets of gender-based violence, but their numbers are extremely small compared to female victims.)

Insist on equal wages and laws. Without equal treatment in workplaces and the justice system, women remain dependent and vulnerable. Men benefit from systemic privileges that validate a position of control. This harms women – and society.

Start early and sweat the small stuff. Children absorb behavioral norms very early on. Seemingly small things such as off-hand sexist comments, joking references to domestic violence, or gross disparities in household chores, set the stage for problematic attitudes and behaviors later in life. Grandparents and teachers matter too. We are all models for the next generation.

Throughout history, social norms have evolved. VAW is not immutable. Our generation can change our understanding of what it means to be a man, advocate for human equality in workplaces and legal systems, and raise our children with intention. 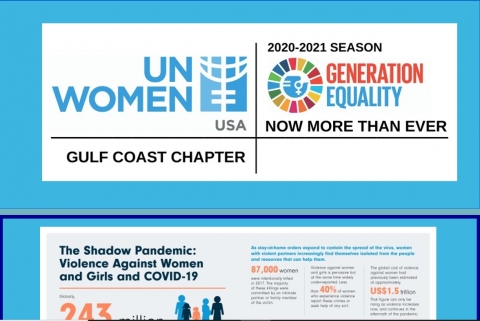 PDFs of the newsletters can also be found at the bottom of this page. 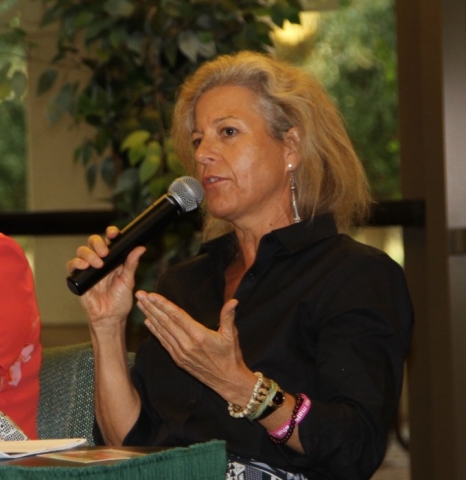 Gender Rights as Human Rights - both locally and globally - was the topic of a panel discussion October 26 at the University of South Florida Sarasota- Manatee. Five panelists shared their experiences and expertise regarding women’s issues in our own local communities and in villages as far away as India and Africa. The Gulf Coast Chapter co-sponsored this event.

Prof. McBrien told stories of how women with whom she works in rural Africa are making real gains by focusing on health, education and economic opportunities in their communities. Leen al-Fatafta shared her story of being an Arab Feminist, an internal compass she was raised with and has carried with her in her travels and studies. She talked about the place of feminism throughout the history of Islam. Prof. Wagner said the current political climate opens the door to discussion and awareness about gender equity issues. Even though many men may not be complicit in gender discrimination, he invited them to move beyond awareness and become active in being part of the solutions. Noelle Polk Clark shared local statistics about discrimination and violence against women. She also shared how CEDAW could be an integral piece in the move toward gender equity. She encouraged attendees to press their local representatives to adopt local CEDAW ordinances. (CEDAW is the Convention on the Elimination of all Forms of Discrimination Against Women)