Take Five: "We are seeking nothing more than our due share of services and opportunities" 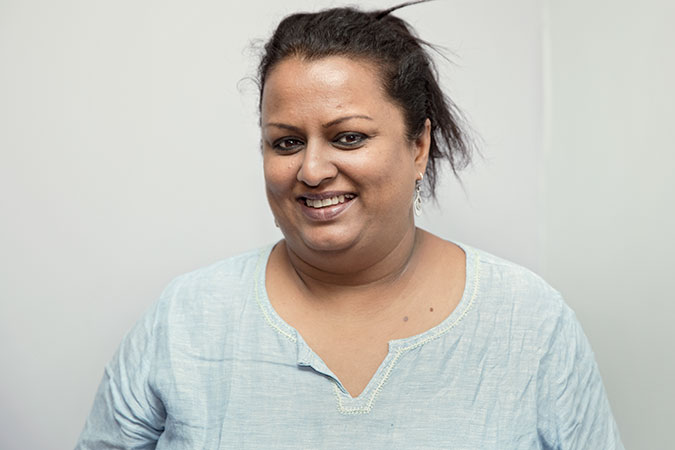 Photo: UN Women/Ryan Brown
Beena Pallical is the Executive Director at the Asia Dalit Rights Forum and the current Manager of a program seeking to strengthen Dalit Women’s Economic Rights across South Asia.

Beena Pallical is the Executive Director at the Asia Dalit Rights Forum and the current Manager of a program seeking to strengthen Dalit Women’s Economic Rights across South Asia [1]. The Dalit community in this region is still considered the lowest of the historical castes and suffers widespread discrimination, despite recent legislation and initiatives. Within the community, the specific problem of women’s economic empowerment has received little attention, but is now the focus of a two-year program funded by UN Women’s Fund for Gender Equality.

What are the fundamental challenges facing Dalit women?
Across Nepal, India, Bangladesh, Sri Lanka and Pakistan, there are around 201 million Dalit men, women and children. The caste system divides society into four layers, but the Dalits are outside those layers, at the bottom of the heap, considered fit only for the dirty jobs such as cleaning latrines and sewers, or skinning animals for leather. They are known as “Untouchables”.

It is a problem of intergenerational poverty. If the women are engaged in manual scavenging, then their children will get into the same trade once they reach 10 or 12 years old. It is hard to break out of these activities if you are the son or daughter of a scavenger.

As a Dalit myself, according to the system people from other castes cannot touch me or eat with me. I cannot use the same tap as the dominant castes, because we are considered to be polluted. This is still in place in several parts of South Asia, especially in rural areas. But it can also take other forms, including in urban areas, for example when people refuse to rent a house to me, or with me, or even from me.

Also, Dalits have restricted access to services across the region, whether those are health services, clean drinking water or education.

What policies and campaigns are already in place?

There are good policies in place, for example in India and Nepal, but the implementation is not there [2]. In Sri Lanka, they don’t even recognize the Dalits as a community or social category. In particular the large number of Dalit women [3] in the tea and rubber plantations work without the protection of any specific policies or recognition of their particular vulnerability.

The Fund for Gender Equality has been supporting the Dalit women’s economic empowerment programme in South Asia since 2016. In Bangladesh over the past two years we have seen the creation of Dalit rights groups, and we have been able for the first time to push for Dalit women to sit at the same table with policy makers. This has really created an impact. Other groups in Nepal, Sri Lanka and India are also working on the ground with Dalit women, as part of the Asia Dalit Rights Forum.

This is a key part of leaving no one behind, as per the 2030 Agenda and the Sustainable Development Goals. It is also important to focus on the intersection of different marginalizations, for Dalits as much as anyone else. Imagine a Dalit woman who is transgender and also disabled, that is at least a triple marginalization.

Unless these concerns are kept at the core of policy drafting, I don’t think we will be able to reach this agenda by 2030. There has been a certain invisibilization, so to say, of this problem by policy makers as well as by society.

Do the Dalits recognize their own rights?

That is a very good question. I think that, as a Dalit community, because we have not had any rights for the longest time, we sometimes fail to claim them. Also, some efforts in recent years to assert ourselves have led to economic reprisals and physical violence.

But we have started realizing that we are seeking nothing more than our due share of services and opportunities. We are not asking for charity. It is the government’s responsibility to ensure that every Dalit woman and man has access to services, education, health, etc.

How has the Fund for Gender Equality changed the lives of Dalit men, women and children?

The support of UN Women’s Fund for Gender Equality arrived at a critical time, when no other agency recognized the need in South Asia for a program to empower Dalit women economically. There had been several programs on violence, but even without violence we need money to build houses and for education.

The Fund has brought this issue to the forefront of Dalit women’s rights, and I think this support has been essential. We have now a group of 15 to 20 women, who would never be able to sit with policy makers or go over budgets, who today are sitting at the same table and arguing and putting their points across.

Of course, the sustainability going forwards will remain a challenge, but at least we have this group of women who have realized that these rights are important. We need to take this forward.

[3] Indian Origin Tamils (IOTs) were brought by the British from South India in the 1820s to work on tea and rubber plantations. Most of them were from the lower strata of the caste structure officially known as Dalits.