Take five: “Leaving no one behind requires specific attention to those that have less resources and opportunities” 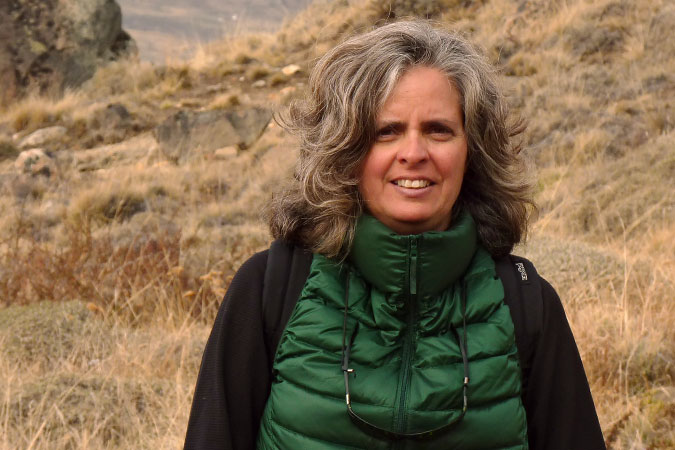 Photo courtesy of Silvia Lodwick
Corina Rodríguez Enríquez is an economist and researcher at the Consejo Nacional de Investigaciones Científicas y Técnicas and Centro Interdisciplinario para el Estudio de Políticas Públicas in Buenos Aires, Argentina. As the High-Level Political Forum meets in New York to review progress on Sustainable Development Goals, Enríquez spoke to UN Women about the SDGs under review, and what it will take to leave no one behind.

Corina Rodríguez Enríquez is an economist and researcher at the Consejo Nacional de Investigaciones Científicas y Técnicas and Centro Interdisciplinario para el Estudio de Políticas Públicas in Buenos Aires, Argentina. She is also the Executive Committee member of the organization, Development Alternatives with Women for a New Era (DAWN) and contributed towards UN Women’s report “Progress of Women in Latin America and the Caribbean” in 2017. As the High-Level Political Forum meets in New York to review progress on Sustainable Development Goals, Enríquez spoke to UN Women about the SDGs under review, and what it will take to leave no one behind.

On 9 July, UN Member States and other stakeholders will come together at the High-Level Political Forum (HLPF) in New York to discuss progress on the SDGs. What is the HLPF and why is its work on monitoring progress on gender equality important?

The High-Level Political Forum (HLPF) is the main UN platform for monitoring, follow-up and review of progress on 2030 Agenda for Sustainable Development. It represents the global level for this monitoring, and provides a space for productive dialogues between governments, UN agencies and civil society, but it does not substitute ongoing monitoring that should be done by relevant institutions at national and regional levels.

Gender equality has been introduced in the SDGs not only as a stand-alone goal (SDG 5) but also mainstreamed into many other goals and indicators. Therefore, the HLPF follow-up process is very relevant to identify not only progress on gender equality, but also obstacles that should be removed to accelerate that progress. The Voluntary National Reviews (VNRs) are important spaces for highlighting good practices that might be replicated in other national cases, but it should also be available for promoting debate and discussing alternatives on how to address the remaining challenges.

This year, SDG 5—the goal dedicated to gender equality and the empowerment of women and girls—is not under review by HLPF. Does that mean we don’t have to worry about gender equality this year?

Of course not. The revision of a set of goals in each session of the HLPF is only a methodology of work. Monitoring SDG progress is a non-stop responsibility of States and Governments; follow up on this progress is also a non-stop process. The progress on gender equality should be assessed in the specific goals under review, whether they have gender equality indicators or not, since every dimension of development is relevant to address gender gaps.

For instance, it might be thought that a goal referred to production and consumption patterns is gender neutral, however, women and men occupy different positions in the production structure (as workers and as asset owners) as well as consumers. Therefore, a policy focused on changing production and consumption patterns will have different impact on women and men. It can help to close gender gaps and improve women´s position, or it can deepen women´s economic subordination if the gender dynamics are not adequately considered.

According to UN Women’s global monitoring report “Turning Promises into Action”, four out of the six SDGs that are under review this year are gender-blind at the indicator-level. This includes SDG 6 (water and sanitation) and SDG 7 (energy). What would tangible progress for women and girls look like in these areas?

Review of the SDGs is guided by progress in selected indicators, but should not be limited to that. Therefore, progress in gender equality in the SDGs under review can be evaluated even if those specific goals are gender-blind at the indicator level.

Progress in SDG 6 and SDG 7 are key for advancing gender equality. For example, access to water, sanitation and energy sources are key for decent livelihoods for women and their households. These goals provide access to goods that guarantee very basic human rights (the right to health, the right to adequate feeding, the right to proper habitat). Also progress in access to water, sanitation and energy can help in reducing women´s unpaid work load, especially in low income countries and rural areas, where women and girls spend long hours fetching water and securing fuel for their households.

How progress in this area is reached should also be monitored. IFrom a feminist perspective, we are taking a particularly critical look at public-private partnership as the preferred way of providing access to social services and energy infrastructure. Public-private partnerships have not proved to be more effective or efficient than public investment, and on the contrary, may be expensive for governments as well as for the population. They also allow the private sector to define priorities on social infrastructure investment, which might be problematic when business interests do not align with populations’ need, which is usually the case.

Finally, progress in SDG 7 on energy should very much take into account environmental implications, as well as the tension between exploitation of natural resources and people´s livelihoods. Many energy projects are pushing population out of their territories, restricting women´s and their households’ access to land and water, and therefore threating basic human rights. All these issues should be part of SDG review, with an integrated approach.

One of the cross-cutting issues that Member States will be discussing at the HLPF is whether we are succeeding at leaving no one behind. Why is this important and how do we ensure that no one is left behind?

Leaving no one behind is a key principle of humanism. It means guaranteeing basic human rights for everyone. The right to live decent lives. If we do not reach this basic goal, the SDGs will be a failure.

Leaving no one behind requires specific attention to those that have less resources and opportunities to access proper living standards, among which women, girls and boys, and gender minorities are the most vulnerable. It does require clear political will and the commitment from governments and the multilateral system. Redistribution is a key strategy to approach this cross-cutting issue, since extreme wealth and income concentration limits life opportunities of many population groups.

We live in a world where 1 per cent of the population keeps 50 per cent of the global wealth. This is the main challenge. There are plenty of resources to guarantee no one is left behind, but also to promote decent lives and more opportunities for all. However, we need political commitment to fight against the dynamics that deepen inequalities: the absence of market regulations, the financialization of capitalism, the race to the bottom in labour and fiscal standards, the existence of financial secrecy jurisdictions that protect the gains of few and the accumulation of illicit financial flows.

Next year, Member States will come together to review the working methods of the HLPF. In your view, what should be their top priorities for strengthening monitoring and accountability for gender equality?

I would fully support the recommendations included in UN Women’s “Turning promises into action” report in this regard. Top priorities for monitoring and accountability for gender equality should include: i) improving the availability and quality of gender statistics; ii) assuring an honest, effective and meaningful participatory process that gives real space for civil society involvement, that allows for women´s rights organizations, through coalitions and alliances, to keep tracking gender equality as a key domain of the SDGs; iii) exposing how resources are mobilized and allocated to programmes and policies aimed at meeting gender equality commitments; iv) strengthening gender-responsive processes and institutions; v) using Voluntary National Reviews not only to congratulate governments on their good practices, but also to expose the obstacles that are making progress difficult, and to create a shared vision of how challenges can be faced; vi) allowing civil society organizations´ shadow reports that might push governments to respond on slow progress; and vii) to open up opportunities for dialogue so that the growing voice of the feminist movement gets into the institutional spaces.