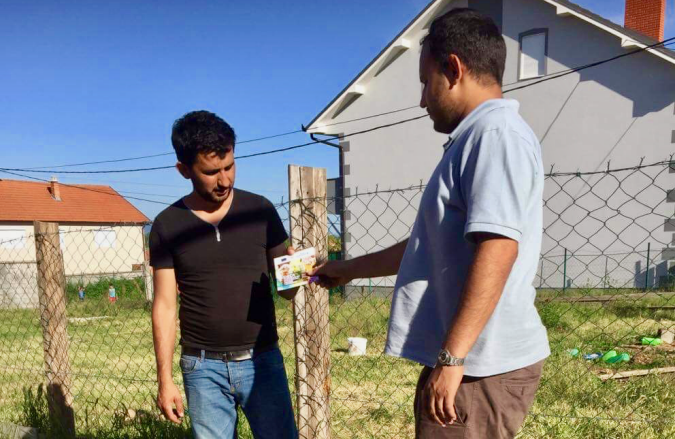 Photo: Adelina Qorraj
Qerim Emini, a 25-year-old man from the Ashkali community in Lipljan, Kosovo had heard many stories of young girls getting married in his city. As it was considered the norm, he thought nothing more of it. Normally, after a few months of marriage, the gossip from the teenage brides would turn to hushed whispers and tales of recent beatings. “Growing up, with every year of school, I began noticing fewer and fewer girls in my classes.”

He recently became a volunteer for a door-to-door campaign to prevent early marriages in minority communities in Kosovo. “I grew up in this neighborhood, so I knew I could be useful; I’m more able to find common ground with the minority communities living here as I am one of them – I am not a stranger entering their home. This is why I got into this work, as a way of connecting more with the people.”

Thanks to the campaign conducted by the Network of Roma, Ashkali and Egyptian Women Organizations of Kosovo (NRAEWOK) – a project under the EU–UN Women regional program, ‘Implementing Norms, Changing Minds’ – these communities are learning about the detrimental effects of early-marriage and the restrictions it imposes on girls’ prospects of a decent life, as well as the mechanisms for preventing the potential for violence against women.

After completing the training on the prevention of early-marriage, Qerim began his door-to-door canvasing, initiating conversations with his fellow community members on the subject and encouraging them to consider other options. He goes from home to home, asking to be invited in to talk about their daughters’ future. It is normally seen as a private family matter so, often, he does not make it past the front porch. However, as a well-regarded male role-model in his community, he has a better chance of being welcomed in. 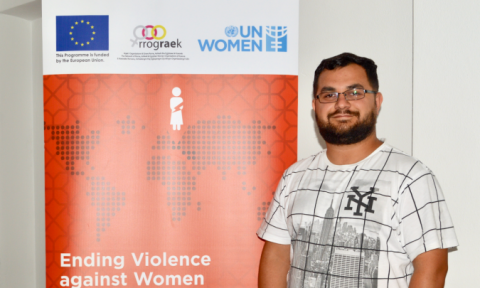 “I typically travel to different parts of Kosovo, in cities where minority communities are more prevalent. Here, I engage people in the streets, at their front doors or in cafes. I try to begin the conversation with something they can relate to, until they feel more comfortable talking to me about the more serious subject of gender inequality and the consequences of early-marriage. I try to explain that early marriages only serve to perpetuate a cycle of abuse and discrimination, but sometimes this is difficult for the community to understand, as it has been a traditional practice in their culture for a long time.”

For Fatmir Zymberi, a member of the Egyptian community who has also participated in the NRAEWOK campaign, the project has been very helpful: “The training has made me into a strong feminist. I am now able to identify forms of gender discrimination and have a better idea of how to prevent it or improve situations in which it is already taking place.”

Early-marriage is a long-standing traditional practice within the Ashkali, Roma and Egyptian communities in Kosovo. Girls are often seen as a burden, so many families consider marrying them off at a young age, as a way of reducing the financial strain. They are expected to drop out of school; however, sacrificing their education leaves them with limited skills and knowledge, undermining their prospects of securing a decent job in the future. This only reinforces their reliance on men.

Additionally, these marriages are often the start of a cycle of abuse. Not knowing how to be a wife, and unsure of how to cook for a large family while balancing the household chores, girls often find themselves the target of abusive family members.

Qendrim Emini, a member of the Ashkali community and a volunteer for NRAEWOK, has also become more confident in being able to prevent further discrimination in his community. He had often heard about young girls getting married, being beaten and then divorced, and nobody doing anything about it. However, now he knows that there are protocols in place for reporting an early-marriage or an abusive situation. As a result of the training for the door-to-door campaign, he is now able to support these girls and provide them with information on services to help them with their needs. “I hope that I can put my knowledge and experience to good use, because I really want to help make this world better for women and men”.

NRAEWOK’s Program Manager, Xhulieta Devolli, confesses that the initiative has been more widely accepted than she had initially anticipated. With 15 years of experience of working to combat violence against women, specifically domestic and sexual violence, she is optimistic that the message is getting through to these communities. For many families, the campaign may have been the first time they had ever discussed the consequences of early-marriage; it has long been an accepted traditional practice that shapes their culture and mentality.

Breaking the long-standing taboo on this subject is critical for further improvement of women’s empowerment. Knowing that these communities are now receiving education and information on the potential negative effects of early marriages brings new hope for future generations”, explains Ms. Devolli.

Qerim, who at times has been taken aback by some of the troubling stories he has heard, remains proud of his role in the campaign and has high hopes for the next step in the implementation process.

“I believe my conversations with the families have been very productive, and I think they have really taken the issue into consideration. They may not show any immediate signs of change, but I realize that changing the mentality of a group is a slow process, and that breaking with tradition is not so easy. But, with more persistent conversations and further activities, I think there will be even more of a positive impact.”